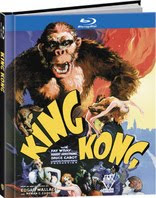 The Eighth Wonder of the World is coming up in high definition. On September 28, Warner Home Video will release the classic action/adventure movie King Kong, in a Blu-ray DigiBook edition. The feature will include all the scenes cut from the re-releases, presenting the 1933 version in its entirety.

The 32-page booklet, featuring photography and trivia, has been edited by film historian Rudy Behlmer.

"The success of great classic films such as The Wizard of Oz, Gone with the Wind, North by Northwest, and most recently, Doctor Zhivago, on the new state-of-the-art Blu-ray format, encouraged us not to wait and withhold this seminal film from the marketplace," said Jeff Baker, Warner Home Video's SVP and GM of theatrical catalog. "Consumer research and studio data indicate that Blu-ray households are openly receptive toward re-buying select films that rise to a level of being considered classic or legendary in nature. Clearly the original King Kong falls within that definition."